Monitor the growth of plant and its invader.

I planted chilli and pak choi in pots using hydroponic system. So, I do not have to watch and take care of it in giving fertilizer and watering. Nearly a month, the plants grow very well and suddenly. chilli has been attacked by snail.

At the same time, I have a plan to monitor and record the growth of the plants. It is for my next project.

Below, you can watch the picture of the plants that automatically captured using ESP32-CAM. Help me and see how the intruder attack the plants. :) 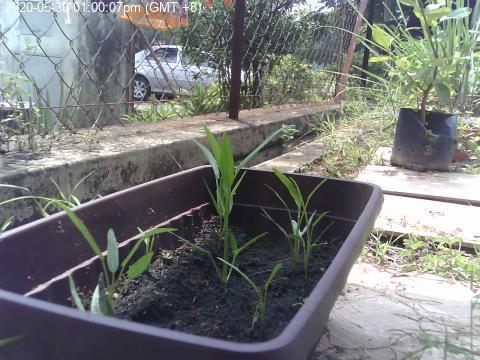 It is not poor but what I mean is how to flash ESP8266 using Arduino Uno as FTDI adaptor. I am not afford to buy FTDI serial adaptor.

By default, when you buy ESP8266, it already flashed with AT firmware. The AT firmware is upgradable depending on its manufacturer or other third party. Using this firmware, external device such as Arduino board can use ESP8266 as a WiFi adaptor.

In the other case, ESP8266's firmware is easy to brick. The main reason of this issue is due to change baud rate using improper AT command. AT+UART and AT+IPR command will brick your module. Try to use AT+CIOBAUD instead next time. If bricked, need to flash back the firmware.

Because of ESP8266's hardware capabilities and ability to be re-flashed, we can write our own program and flash it to the module. The good thing is, we can write sketch using Arduino IDE.